Manufactured Halloween costumes were big business by the 1950s. I remember my nose turning blue from the dye in a mask when I was 3 or 4 years old. After that, my mom made my costumes, but I remained fascinated with the colorful and mysterious boxes of costumes that lined the shelves every October. As printers, we can look at the boxes and see the evolution of design and manufacturing capabilities through the years. By the time these mass-produced costumes were popular, the usual themes of jack-o-lanterns, ghosts, black cats, and witches had been joined by clowns, dolls, TV characters, monsters, gypsies, comic book characters, fairy tale characters, and more.

Besides the printing processes required for the costume boxes, the ability to print the molded plastic masks and screen print the nylon and polyester costumes allowed for lots of variety. The costumes themselves were generally boxy pajama-like garments, so screen printing them allowed branding, merchandising and licensing opportunities that made this big business.  I’m not sure exactly when the shift to more sophisticated costumes occurred, but these were still going strong in the 1970s and ’80s.  The Strawberry Shortcake example below should look very familiar to some of you!

Here’s another example featuring Fred Flintstone. You can see the generic costume, and the heavy use of printing to make it distinctive. These are different manufacturers, so either the brand was licensed to more than one manufacturer, or they were produced during different years. By this time – probably late ’60s – having that ventilated mask had become a selling point. Isn’t print handy??

These were all inexpensive, and being able to mass produce them kept the price down. Unlike today, costumes didn’t have much shelf life. The materials were flimsy, and mostly designed to be worn one time, and for one purpose: Trick or Treating!!  They weren’t created to be heirlooms, or handed down through the family. It’s amazing any of them survived at all, considering they wouldn’t hold up to cleaning or laundering. The fabrics were kind of smelly, actually – better living through chemistry, right?!

Given all the TV-inoculated kids of the era, it’s not surprising that blood and gore were big sellers. The more gruesome, the better. What could be more satisfying than walking around the neighborhood frightening small children with these masks?

By the time my grandkids started trick or treating in the early 2000s, costumes were much more elaborate, and frequently doubled as actual pajamas. Better fabrics and construction allowed them to be handed down to younger siblings and friends, so even though they’re probably as much fun, they sure don’t have the distinctive look and feel that we see in the vintage examples above. I love everything about these: the fonts, the printing processes, the artwork, the colors, and the awful fabrics. And THAT is the value of print and nostalgia – they hang around! 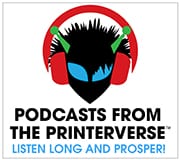